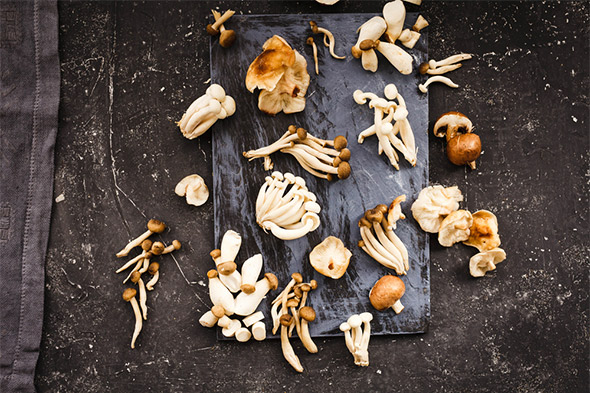 Mushrooms start their lives underground, as a bit of white fluff known as mycelium. These fungal threads sprout the mushrooms, which are actually the fruit of a much bigger fungus that grows underground. In the right conditions – with sufficient food and humidity and the proper temperature – buds will form from the mycelium. They seek daylight… and a mushroom is born. When the “cap” of the mushroom opens, it will start dropping millions of tiny spores that are spread by the wind and that, in turn, start forming more mycelium.

Aside from the spores (the microscopic seeds that act as reproductive agents), and the mycelium, the parts of the mushroom that are visible when we buy them are the stem, which is the vertical axis that supports the cap; the gills, which produce the spores and are found under the cap; the ring, which is a membrane that is located under the cap and around the stem; and the cap, which is the upper part of the mushroom that protects the gills and can come in different shapes and colors.

In 1780, a French gardener by the name of Chambry discovered that caves have the ideal climate for growing mushrooms (100% humidity and temperature of 10 degrees Celsius). Mushroom cultivation in the United States, however, first began in Kennett Square, Pennsylvania – now considered by some to be the mushroom capital of the world – when, in 1896, two local Quaker farmers looked for a way to make more efficient use of their greenhouses by using the area underneath the shelves to grow mushrooms. They went to Europe where people were already farming mushrooms and brought back some spores. This put the town on the mushroom map, attracting other farmers and workers to this sleepy town, to the point where these days, over 65% of the mushrooms consumed in the United States are grown there. Beginning in the mid-1980’s the town began the annual Mushroom Festival, which has gotten larger every year and is held on the first weekend after Labor Day.

Worldwide, mushroom use has exploded in the last few decades, and the leading global producers and exporters of the fungi – more than 4 million tons a year – are China, the United States, the Netherlands, Poland, Spain, and France.

Edible and commonly used mushrooms can roughly be divided into two categories: saprophytes and mycorrhiza. Saprophytes grow on dead organic matter, such as fallen leaves and plant roots, from which they extract carbon dioxide and minerals. This category includes the most “famous” mushrooms, such white button mushrooms, crimini, shiitake and oyster mushrooms.

The mycorrhiza forms a mutually beneficial relationship with the roots of living trees. They take sugars and nutrients from the tree, but they give back minerals and essential elements, enlarging the root system of their hosts. Mushrooms that belong to this group are more difficult to cultivate (and are therefore more expensive). Porcini mushrooms, chanterelles and truffles are part of this group.

The Mushrooms We Know and Love

Everybody knows the white button mushroom – it is the most widely cultivated, harvested and distributed mushroom in the world. White mushrooms have a smooth, rounded cap and completely closed “gills.” When eaten raw, they have a mild taste, which blends well with other vegetables. If you’re lucky enough to find extra-large white button mushrooms, they’re great for stuffing.

Crimini mushrooms are similar in appearance to white button mushrooms, but they have a darker tan-colored cap and a firmer texture.

Portobellos are fully grown chestnut mushrooms, which are sold without the stem. They have a full mushroom flavor and are suitable for stuffing or even grilling, due to their firm meat. They have a dark-brown cap that can measure up to six inches across and their deep flavor and hearty consistency make them a great vegetarian alternative to meat.

Chantarelle mushrooms range in color from pale yellow to darker yellow; they are trumpet shaped, and have a nutty, peppery flavor and a chewy texture. They are among the most popular wild mushrooms.

Porcini mushrooms are firm mushrooms with a delicious nutty taste. They can even be grilled on a barbecue.

These mushrooms have spaghetti-like stems, topped with white caps. They have a crunchy texture and a slightly fruity flavor. They are often used in salads, as they make a beautiful presentation.

The oyster mushroom is named after its oyster-shaped cap. They vary in color from white to gray or tan to dark brown. Oyster mushrooms have a soft, velvety texture, and a mild flavor, and they are perfect for use in mushrooms soups.

Shiitake mushrooms originated in China and Japan. They’re rich in protein and have brownish, broad, umbrella-shaped caps with curved stems. They release a piney scent when cooked and have a rich, earthy flavor, which can augment almost any dish.

This wild variety belongs to the same species as truffles. They have cone-shaped caps that range in color from tan to dark brown, and they are most famously served after being sautéed in butter.

All cultivated varieties of mushrooms share the same nutritional values: They are low in calories, sodium-free, fat-free, and cholesterol-free, and they are an important (and delicious) part of a healthy diet. They are a great source of B vitamins, which help to provide energy by breaking down proteins, fats and carbohydrates. In the produce section, mushrooms are the leading source of the antioxidant “selenium,” which, like other antioxidants, protects the body’s cells from damage that might lead to chronic diseases and helps to strengthen the immune system.

Because they are meaty and substantial, mushrooms are hearty and filling; therefore, using mushrooms regularly in your diet is a great way to reduce daily calorie intake while at the same time feeling full after meals.

Care and Handling of Mushrooms

When selecting mushrooms, look for ones with a fresh, smooth appearance, that are free from major blemishes, and that have a dry, clean surface.

Keep mushrooms refrigerated. They’re best when used within two to three days after purchase, but you can prolong their shelf like by storing them in a paper bag. Always remove the plastic wrap from packaged mushrooms, and do not store them in air tight containers, which attract moisture condensation that speeds spoilage.

Do not rinse mushrooms until you’re ready to use them. Gently wipe mushrooms with a damp cloth, soft brush, or your fingers to remove small peat moss particles. Or, rinse with cold water and pat dry with paper towels.

Mushrooms are delicious when eaten raw – in salads or just as a snack. But when sautéed, with butter, they are divine. Add onions and you have the perfect filling for omelets, or eat alone and enjoy. 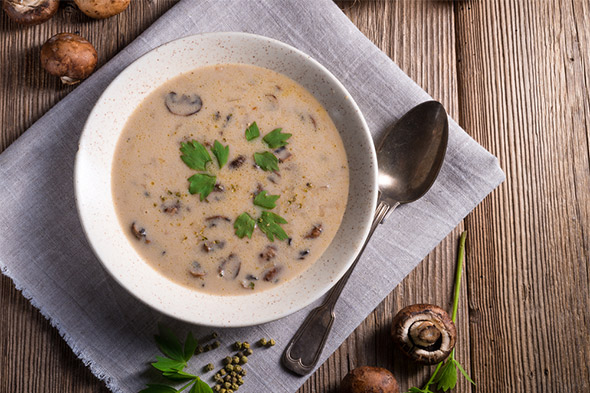 My family loves soup all year round, and this is one of their favorites. It has lots of flavor and is quick and easy to prepare. It’s a rich and filling mushroom soup, but it derives a lot of its flavor from other ingredients.

Edible mushrooms are known for their health benefits; they are low in sodium, fat, and calories, and they contain potassium, protein, selenium, and niacin. Mostly, however, they are perhaps the most versatile resident of the produce aisle with hundreds of uses, in recipes that range from the simple and quick to the complicated and gourmet. They are irresistible either raw or cooked, and they add depth and flavor to every dish in which they are incorporated. Very simply: Don’t leave the store without them.