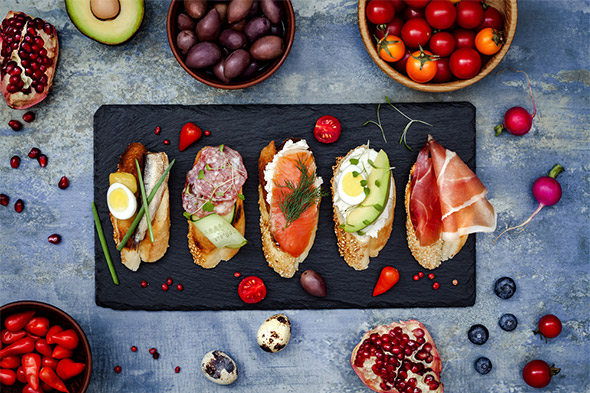 In upscale restaurants around the world – and, nowadays, at home-cooked dinner parties – the amuse-bouche is having a moment. Once the mainstay of French chefs alone, these bite-size hors d’oeuvres aren’t just reserved for fancy restaurants anymore. These tiny bites served just before a meal are a clever way for chefs and amateur cooks alike to show off their skills, welcome their guests, and give a small peek into what is about to come.

Not Just for the French

Amuse-bouche (pronounced amuse boosh), means “to amuse the mouth” in French, and that is exactly what restaurant chefs and home cooks who serve these little bundles of culinary joy are setting out to do. The goal is to entertain guests with a beautiful, bite-size surprise that delights almost all the senses. Amuse-bouches are not to be confused with palate cleansers (also known as intermezzo) as these are served between courses, while amuse-bouches are classically offered before the meal begins to prepare guests for what comes next and to tantalize and stimulate the taste buds.

END_OF_DOCUMENT_TOKEN_TO_BE_REPLACED TGI Fridays made headlines last winter by announcing that its Endless Choice Appetizer special would return in the spring. This deal allows customers to pay just $12 for a bottomless rotation of nine of the casual dining chain’s most popular appetizers, including everything from boneless Buffalo wings to loaded potato skins. Is TGI Fridays onto something? Should your restaurant also be getting on board with free appetizers and other appetizer-related promotions? Let’s take a closer look at the growing appetizer trend, along with why introducing free appetizers may be a savvy move for today’s restaurants.

How much so? White Gies wouldn’t speak in specifics, he did reveal that sales not only jumped, but across double digits. The promotion also led a whopping 50 percent lead in sought-after Millennial customers. In the most recent Endless Choice go-round, Fridays anticipated even greater returns because — unlike in its first incarnation — diners were allowed to choose between refills of any appetizers as opposed to just the original appetizer ordered.

Do you have to roll out a massive, well-publicized promotion like Fridays to lure diners in with free appetizers? No. As it turns out, even free appetizers like chips and salsa, popcorn baskets, and bread with butter can have the same effect. Here are some benefits of incorporating free appetizers of any ilk into your restaurant strategies.

Aside from the fact that people simply like free things, offering free appetizers — particularly those which arrive at the table even before orders are placed– fosters positive diner perception of customer service. Why? Because free appetizers immediately satisfies the needs of hungry diners. In doing so, they also subdue hunger-related irritations, keep diners entertained, and give them something to do while they wait to place their order.
One caveat? Free appetizers served before orders are placed can delay diners from placing their orders, so some turnabout-minded restaurants prefer to wait to serve free appetizers until after meals have been ordered. As timing is everything in the restaurant business, finding the right formula is essential to making the most out of your free appetizer strategies.

Today’s diners have more options than ever before. What separates your restaurant from the one down the street? In the case of hungry, budget-conscious diners, free appetizers may be this differentiator. Introducing an appetizer or other promotion during slower times, meanwhile, can help fill downtime. Why appetizers? Not only are they immediate, but they also have a significantly lower cost than entrees.

Meanwhile, appetizers are also the way to go if you’re courting the Millennial market — which you should be: not only have Millennials recently overtaken the Baby Boomers as the largest generation ever, but they’ve also got some serious purchasing power. According to Technomic’s 2015 Starters, Small Plates and Sides Consumer Trend Report, Millennials make up more than half of appetizer-ordering customers.

Worried about being eaten under the table by greedy consumers? Fridays reveals that this hasn’t been a concern: most customers reorder only once. And even though the Fridays Endless Choice promotion may have — at least for the time being — come to an end, some tasty takeaways remain for today’s restaurants looking for new ways to attract and satisfy today’s diners.