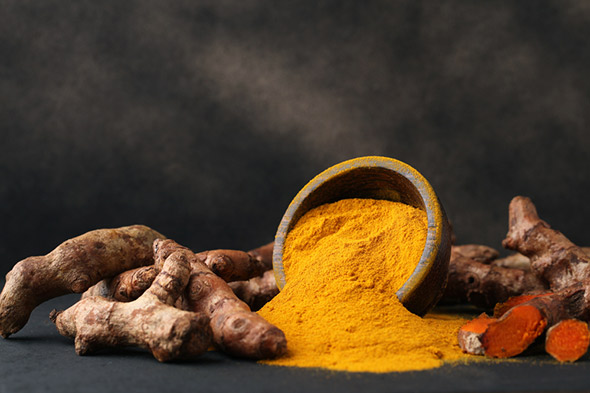 Turmeric: From the Middle East to… Everywhere

Middle Eastern cuisine in general, and Mid-Eastern spices, in particular, are big trends this year, with caterers using exotic tastes to lure trend-savvy clients. Dishes spiced with turmeric are popping up everywhere due to their amazing taste and turmeric’s powerful health benefits. Learn more about turmeric here and start using this increasingly popular spice in more of your dishes.

A prominent member of the ginger family, turmeric has been used in East India and the Middle East for thousands of years, but only lately has it become one of the most popular spices in the world. Turmeric is packed with the powerful medicinal properties of curcumin, which research indicates may have strong anti-inflammatory properties. In ancient times, turmeric was used to treat a wide variety of conditions, such as jaundice, toothaches, bruises, chest pain, and colic.

The name “turmeric” is derived from the Persian word for “saffron,” and the spice provides the intense color of the pricey spice, as well as classic yellow mustard and curry powder. A domesticated plant, with a peppery flavor and a mild kick, turmeric it is grown primarily in India, while Indonesia, the Philippines, and China are also major producers of the spice.

Turmeric is packed with manganese and iron, and it is a great source of vitamin B6, potassium, and vitamin C. One tablespoon of turmeric also contains a significant amount of phytonutrients. Turmeric helps in the body’s ability to digest fats, reduce gas, and decrease congestion; it is also used as an aid to improve skin conditions such as eczema, psoriasis, and acne. Curcumin, the main pharmacological ingredient in turmeric, has anti-inflammatory agents that don’t produce the toxic effects that many synthetic drugs may. In other words, turmeric has many of the positive effects of prescription meds with fewer negative results.

Turmeric milk, sometimes referred to as golden milk, is an infusion of either dry turmeric powder or fresh turmeric root in milk. It is traditionally used in Indian households for treating certain diseases, or as a tonic for general health. A cup of warm turmeric milk can ease headaches, promote decongestion, and help sinus drainage.

Golden milk is easy to prepare and very palatable, as the milk takes most of the spiciness out of the turmeric. In the United States, golden milk is a big part of the turmeric trend, and it is being mass produced by companies such as Pressed Juicery and Rebbl; however, it is just as easy to make your own golden milk with very little fuss and bother. 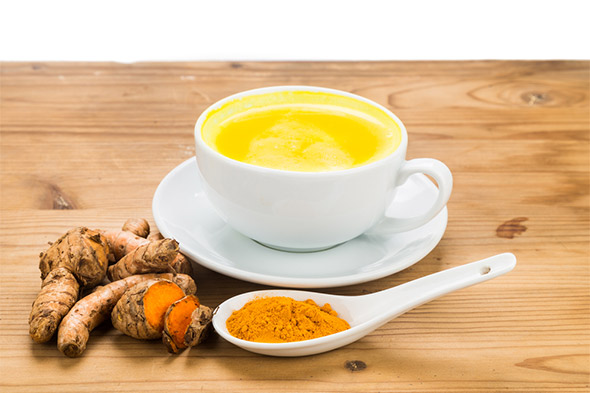 Turmeric milk is ideally prepared with whole (full-fat) milk. You can use skimmed milk to save the calories, but milk fat helps the absorption of turmeric’s components. There is no need to add sweeteners to turmeric milk; in fact, a tiny pinch of pepper can add to the flavor and boost the benefits of curcumin, turmeric’s main medicinal ingredient.

By using turmeric in your dishes you can infuse them with the tastes of the Far East and the Middle East. Add an exotic twist – and a deep golden hue – to any soup recipe, and augment pilafs and stews with a new dimension of flavor.

Rice with Cashews and Turmeric

Turmeric is most definitely the spice of the moment, and it is showing up in catered buffets, restaurant dishes, and private homes everywhere. Amazingly versatile and packed with the anti-inflammatory compound, curcumin, this healthy golden spice is showing up in everything from drinks to curries. No matter what you’re preparing, you can easily incorporate turmeric to spice up the dish and add a little savory extra – much to every diner’s delight.